Christmas came early for a pair of Cloverdale area families on Monday afternoon.

Both students had been away from school earlier in the day on a field trip with a pair of other students to Endeavor Communications. While there, one of their hosts asked them all what they wanted for Christmas. 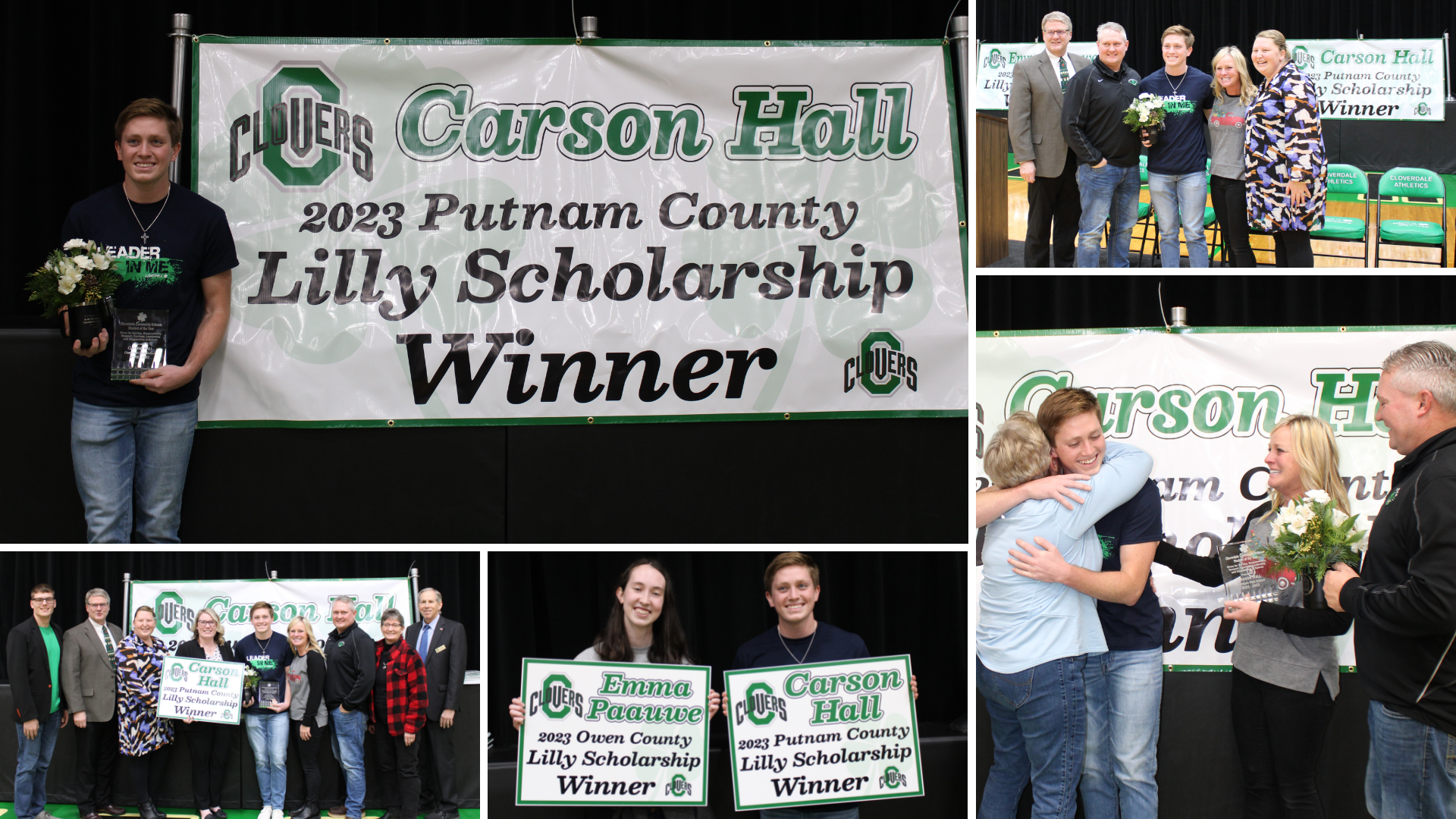 “I jokingly said, ‘The Lilly Scholarship,’” Paauwe recalled with a laugh, “having no idea that I would win it.”

However, for two of the brightest students in a two-county area, the clues started to add up to something.

They received a fire truck escort back to school. Then when they arrived in the CHS cafeteria, their parents were waiting for them. They didn’t know yet that a pep rally, including the CHS pep band, was waiting in the gym.

“We asked, ‘What are we doing?’ Hall said. “Then they finally let us walk to the gymnasium and I asked Emma, ‘What do you think this is for?’ The only thing that came to my mind was —”

“I said, ‘That’s the only thing that’s in my mind,’” Hall continued. “But you didn’t want to assume. From the start, we both said we didn’t want to get our hopes up. We had an idea as soon as we were heading to the gym, but before that, no clue.”

Meanwhile, in the gym, Principal Sonny Stoltz, who had pulled the strings to make the big celebration happen, and even the cover trip to Endeavor, made the announcement to not only the assembled high school students, but also Cloverdale Middle School and Cloverdale Elementary School students.

They had gathered under the guise of a “Leader In Me” celebration, as all CCSC students take part in the leadership and life skills program.

“Today we’re going to celebrate two of the best leaders in our school,” Stoltz explained shortly before making the big reveal to the students. “It’s amazing. We’re excited. They’re going to be flabbergasted when they walk in here. We’re going to give them a little bit of a party.” 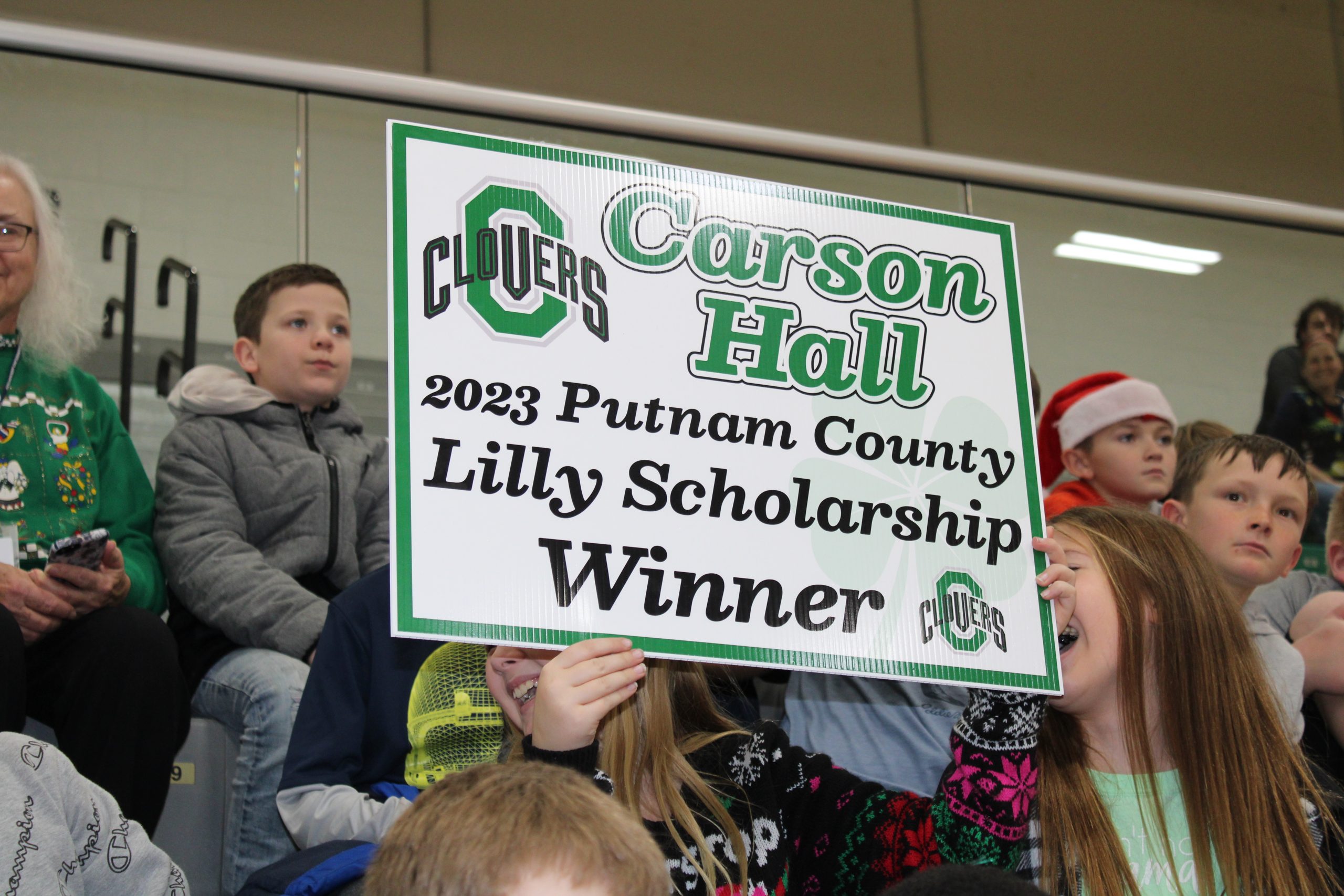 And a party it was. Not only did the pep band play the school song as they entered the gym, but students held up signs noting each student’s accomplishment.

“It was definitely very surprising,” Paauwe said. “When we walked in and they started playing the school song, it was definitely exhilarating to see everybody holding up our names to celebrate us.”

Finally, Stoltz concluded the program with a special award, naming Paauwe and Hall the co-Students of the Year for Cloverdale High School.

While only one Lilly winner is named per county each year, Cloverdale is in the unique position of drawing students not only from Cloverdale Township in Putnam County, but also from Jackson, Jennings and Taylor Townships in Owen County.

Each student reflected on what the scholarship meant to his or her family.

For Emma, the daughter of David and Melanie Paauwe, it’s kind of a first-time opportunity for the family.

“I have no one in my close family who has a bachelor’s degree, so to have the opportunity to go to college basically for free is pretty amazing,” Paauwe said. “My family said they would pay a little bit for college, but I’d be the one covering most of it. I think having this opportunity is definitely beneficial for me and my college career.”

Hall, the son of Larry and Sheryl Hall, spoke of how glad he was that neither he nor his parents had to worry about the financial side of attending college.

“Now that I have this, it’s one thing off my shoulders that I don’t have to worry about as much,” Hall said. “My mom and dad said they’d help pay for a little bit of it, but I hate to ask them for a lot of money for tuition. And with my brother in college too, that’s a lot. I’m very pleased to be able to have this just because it’s not helping me only, it’s also helping my family as well.”

Given in each Indiana county, the prestigious Lilly Community Scholarship will provide full tuition and fees for four years of attendance at any Indiana college or university. In addition, recipients receive a $900 annual stipend for required books and equipment.

Selection criteria for the Lilly Endowment Community Scholarship is based on scholastic abilities and intellectual pursuits, capacity to lead and motivate fellow students, social commitment and extracurricular involvement, and the ability to articulate career plans that demonstrate motivation and initiative.

While informing Hall that he was the 2023 Putnam County Lilly Endowment Community Scholar, Lanham commented, “Carson is an exceptional young man. He is truly a leader and positively influences anyone he meets. All of the candidates that the committee had the pleasure of meeting are phenomenal young adults. The future of Putnam County is very bright.”

Hall will be a 10-year 4-H member, a four-year member of Positively Influencing Everyone (PIE), a leader for Cloverdale’s Community Outreach Service Project, and a volunteer for Cloverdale Dollars for Scholars.

Carson also serves as treasurer for Cloverdale High School Student Council, a member of National Honor Society, a volunteer at Greencastle Christian Church and an accomplished athlete in cross country, swimming and track and field. As the only member of the Cloverdale swim team, Hall has practiced alongside the team at Greencastle High School where he was named team captain to lead other swimmers who he competes against.

“He is a natural leader who takes initiative within the school and community,” commented a teacher in a letter of recommendation for Hall. “He always fills leadership roles and follows it through with great passion. The example he sets for his peers has left an impact on all those around.”

In the classroom, Hall has distinguished himself by earning well more than the 43 credits necessary for graduation. He has consistently maintained academic excellence and currently ranks first in his class with an unweighted GPA of 3.994.

Hall hopes to begin his studies in business next year, eventually earning an MBA. While he’s still unsure of his exact career goals, he knows that he wants to give back to students right here in Putnam County. “One thing I do know is that I want to give back to the place that gave me some of the best experiences in my life when I graduate.”

Hall is currently unsure of where he will study, but noted that he had applied to Indiana University, Butler University, Indiana State University and IUPUI, as all have strong business programs. He added that the Lilly selection “sealed the deal” to stay in state.

Paauwe ranks first in her class and is graduating early from high school as a Junior. She is the first-ever Junior from Owen County to receive the Lilly Endowment Community Scholarship. She has served as captain of the Academic Super Bowl – Science Bowl team, Junior Editor of Citizen One News, player of the clarinet in the Cloverdale High School Band, and member of Cloverdale High School’s theater department.

Her recommendations speak to her character as a diligent student, a positive role model, and an individual that “never fails to make a contribution.”

“Emma was recommended for the Lilly Endowment Community Scholarship because of her impeccable academic record, her leadership in a wide variety of extracurricular activities and her poise and confidence during the interview process,” Myrna Fields, who chairs the Owen County Lilly committee, said. “She demonstrated an excellent understanding of the motivation and drive needed to succeed and accomplish her goals.”

“This year we saw a deep field of scholarship applicants filled with students on their way to doing great things,” Rummel said. “Our LECS application process requires students to demonstrate academic excellence, community-mindedness, leadership and communication skills, and we were thrilled with the quality of applications and interviews. These students are excellent role models for our communities, and they all demonstrate great potential in leading the next generation.”

Despite all this, Rummel said that “one student stood out” from the field.

Paauwe plans to study computer science and software engineering. She noted that she will be withdrawing her applications from out-of-state schools, but will also submit some new applications within the state.

“I’ll definitely be considering more prestigious schools in Indiana, such as Notre Dame. I’m very excited to be looking at schools like that,” Paauwe said.

Paauwe and Hall are the first Lilly Scholars from CHS since 2016-17, when Andrew Johnson won the Owen County award.

Meanwhile, Hall is the first Putnam County Lilly winner from Cloverdale since James Fidler in 2008.