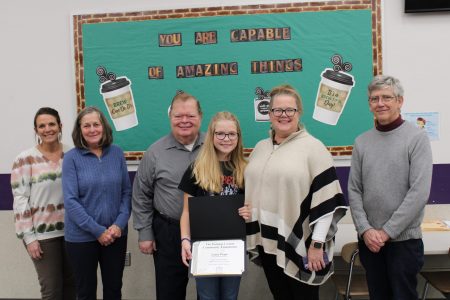 In recognition of Pope’s accomplishment, Castlemakers, the charity of her choice, received a $150 grant. Additionally, Greencastle Middle School received a $500 grant. Her essay highlighted the philanthropic work of her mother, Jeanette Pope.

The Darrell Wiatt Family Philanthropy Essay Contest was established in 2006 by Darrell Wiatt, a passionate community member and former educator at the North Putnam Community School Corporation. Through the program, the Community Foundation hopes to recognize a few of the everyday philanthropists in Putnam County and to ensure that no child will graduate from high school without knowing the meaning of the word “philanthropy”.

Entries were accepted from seventh-grade students throughout the county. Students were instructed to write a 500-word essay about “The Philanthropist I Know Personally and Admire the Most.” The essays were reviewed by four judges at the county level and scored on criteria such as spelling, grammar, organization, content of essay, and understanding of philanthropy.

Six finalists were chosen from the participating middle schools in Putnam County. The additional five finalists awarded their charities of choice a $50 grant.

Vedia Medina, a student at Greencastle Middle School, wrote about her grandfather, Pat Frame. She chose SAWs: Servants at Work to receive a Finalist Grant Award.

Weston Houser, a student at North Putnam Middle School, chose the Humane Society of Putnam County to receive a Finalist Grant Award. His uncle, Curt Frund, is the philanthropist about whom he wrote.

Bryce Deardorf, a student at North Putnam Middle School, chose the Humane Society of Putnam County to receive a Finalist Grant Award. The philanthropist he admires most is his mother, Brooke Evens.

These grants are made from the Darrell Wiatt Family Philanthropy Essay Contest Endowment, which was established in 2012 by the Wiatt Family to promote philanthropic education and award grants for the essay contest.